Every day, women live with the risk of being physically attacked. It’s not one of those dangers that is regularly blown out of proportion – such as being in an aeroplane crash or getting bitten by a shark. Attacks on women are common. The EU Agency for Fundamental Rights surveyed 42,000 women and concluded that 31% of women have experienced one or more acts of physical violence since the age of 15.

But there is also a long tradition of women learning how to fight back against assault. In Edwardian Britain, suffragettes trained in the Japanese martial art, jiu-jitsu, to defend themselves during rallies and protests. And during WWII, the growing number of physical attacks against women performing new roles led to the first of many self-defence manuals: Hands Off!: Self-Defence for Women.

Self-defence has recently moved to social media. Videos from sites such as Buzzfeed have gone viral. One video: 11 Self Defense Tips That Will Make You Feel Safer Walking Alone – has had more than 19m hits on Facebook alone. But while such displays often come with laudable intentions and good advice, they could actually put women in danger.

Let’s take the Buzzfeed video, as an example. The instructor and “assailant” is Nelson Nio, founder of martial arts-derived street self-defence system for women – SHIELD. The video offers some sound tips – it encourages women to be aware of their surroundings, use their voice or scream as a weapon and run in a zig-zag manner whenever possible.

The emergency self-defence techniques are correctly executed. The “victim” – an athletic young woman – overcomes bear hugs, hair and arm grabs and chokes from behind. She is most likely a SHIELD practitioner who makes the moves look simple, effective and readily applied regardless of size and strength.

But videos like this can imply that it’s possible to learn self-defence online, or that attacks will actually play out as the video depicts. Viewers may also feel more confident after watching such videos and shift their response to attack from “flight” to “fight”. The Buzzfeed piece concludes that if you must defend yourself, “let your adrenaline take over and become the aggressor”.

The physicality of fighting 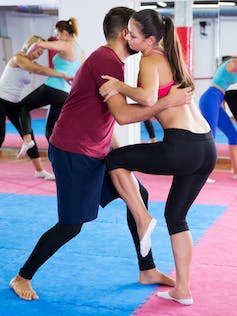 But unless the viewer is prepared to invest plenty of time and training this is probably not the best advice. Simple techniques are difficult to apply under real-life pressure, where there are limited chances to slip, strike or run. And attackers often behave in unpredictable ways.

Even in self-defence classes, demonstrations tend to be given with compliant partners – as is clearly the case in the Buzzfeed video. You can see that the assailant pauses briefly following the attacks and uses singular rather than multiple attacking movements. He pauses and feigns pain when being “struck”, fails to free himself from the restraint techniques and remains silent throughout.

But real assaults are not perfectly choreographed – and attackers won’t be following the script. There is evidence to suggest that determined people can often absorb powerful strikes, even to sensitive areas, and may continue attacks regardless of injury or pain – especially if they have consumed drugs, alcohol or are experienced fighters themselves. Even strikes to the face or groin might not halt an attack, unless they inflict considerable pain and damage.

When people are put into locks, they generally resist, struggle, shift their weight to gain leverage, kick out or use a free hand. In a bear hug, when kicked in the groin, attackers will just as likely tighten their grip and drop to the floor with the victim underneath. A heavier attacker will be better able to resist locks and absorb strikes, too. Mass matters – this is why combat sports have weight categories.Striking ineffectually carries a big risk, because it leaves you within range of the attacker – and because striking an aggressor turns the confrontation into a fight. Attacks are usually fast and committed, and attackers do not normally freeze when executing a move. A grab from behind can transition to a takedown, while a hair grasp might be accompanied with strikes, kicks or shoves.

Bruce Lee said, “boards don’t hit back”. Training objects, such as compliant training partners and demonstration videos, lack the kinaesthetic feedback (the awareness if the movement of parts of the body by the sensory organs) required to develop skills to cope with real-world situations. Those looking to defend themselves must be able to adapt techniques depending on the circumstances of the attack. They should also be able to transition between techniques and automatically perform powerful and accurate counterattacks.

All this takes lots of time, practice and variation with partners of different sizes, reaches, strengths, personalities and motivations. Progressive scenarios should be used to simulate reality. Combat systems use such methods to prepare people for potential scenarios through months or even years of regular, intense and interactive physical training, with knowledgeable and competent others, some of whom should possess experiences of violence.

There’s scientific evidence to show that sustained training has the power to improve combat reaction times, attention and alertness and cognitive function in older adults.

Even then, the ultimate aim of self-defence is to minimise violence and avoid confrontation. Spending so much of one’s life perfecting this goal is indeed the paradox of the martial arts – to love fighting but hate violence.

This article was originally published on The Conversation. Read the original article.

Since 1993 West Coast Aikido Martial Arts Academy has trained thousands of people in Perth’s Northern Suburbs our Self Defence Martial Art. Regardless of your gender, age, fitness level or physical limitations, we can help you learn our amazing martial art and teach you great way to live.  Yoseikan Aikido Self-Defence is easy to learn and will enable you to defend yourself or your loved ones, overcome fear, gain confidence and get fighting fit. You will reduce stress, improve your fitness, become more self-disciplined, have greater focus, awareness, elevated self-esteem and get more out of life! Many learn Aikido as a form of nonviolent self-defence, but many also train in Aikido for the mental and spiritual benefits that it provides. At West Coast Aikido Martial Arts, we are dedicated to helping you acquire practical self-defence skills whilst reducing stress, and getting into the best shape of your life! We offer classes for Women and Men, Children, Youth, Teens, Adults and Seniors. Start you FREE TRIAL today by visiting www.wcaikido.com